The world is becoming a less authentic place, according to research from PR agency The Lucre Group. More than 1,000 people across the UK took part in the research, which uncovers growing mistrust and authenticity issues in society. Two-thirds (67%) of people believe the world is now less authentic than in the past. 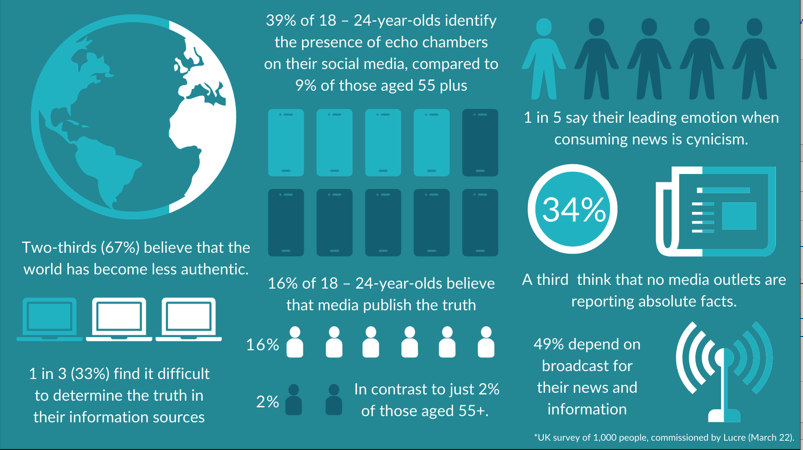 Public concern that facts are being distorted in the media is clear. Two in three respondents (68%) think negative headlines sell and, significantly, a third (34%) believe there are no media outlets reporting absolute facts.

The survey asked the public for their views on the growing gap between truth and fiction. A third (33%) admit they find it difficult to determine the truth in their information sources. One in five (20%) say their leading emotion when consuming news is cynicism and one in 10 (9%) are left feeling confused.

Traditional media outlets are still perceived to have the strong-hold regarding “hard news”, despite the rise in social media. Surprisingly, more than 85% of people receive their information from broadcast and traditional media sources, whilst social media only accounts for around 12% of the public’s access to stories.

Younger demographics were found to be more trusting of the press, suggesting a generational split in the perception of trustworthy sources; 16% of 18 to 24-year-olds believe that media publish the truth, versus just 2% of those aged 55 plus. The 18 to 24 age group were also the most likely to be aware of echo chambers impacting their social media feeds; 39% believe they are part of a disturbing echo chamber and therefore not necessarily exposed to a rounded set of views or facts.

Despite the hype and proliferation around influencers, their true value is yet to be realised, with around 75% of people saying they had never purchased anything promoted through influencer channels. Leisure and lifestyle seemed to be the areas with most influencer engagement, with 25-34 year olds the most easily sold to.

The idea that people prefer authenticity and reliable sources to check facts is not new. Disinformation is in the spotlight and more than half (56%) cite recent political dramas in the UK and US as a factor.

The UK’s most cynical city when it comes to consumption of the news is Bristol (30%), closely followed by Leeds (28%), and Manchester (27%).

Currently, few on and offline public figures, brands, or news outlets appear to be taking action to reassure consumers of their responsibility for truthful reporting. As a result, the public has grown cynical in their attitudes to the distinctions between truth and fiction. The rise of phrases such as ‘fake news’ represent a public vocabulary that accepts mistruths and uncertainty as unavoidable. 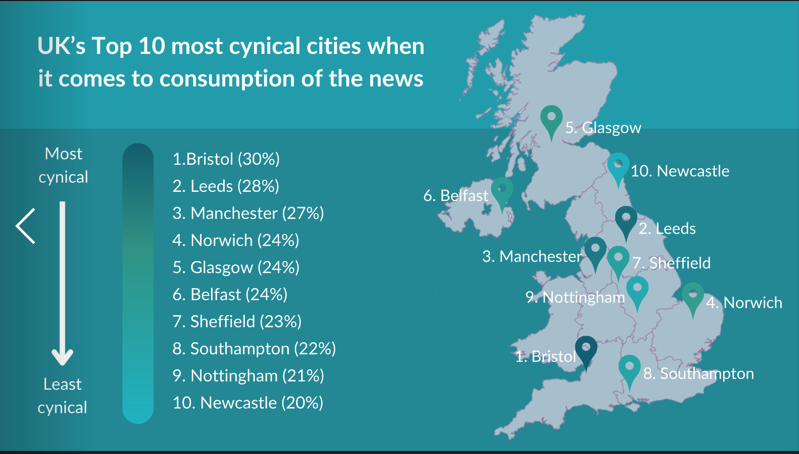 Consumers must be reassured with commitments to authenticity in reporting if they are to have their trust won by media outlets, new and old. As a communications industry, we have a responsibility to play our part in upholding authenticity in a media landscape where misinformation can rapidly spread. Any brand wishing to embark on this journey will have to be prepared to wholeheartedly embrace the true cost of authenticity, but the rewards could be substantial.

Research commissioned by PR agency The Lucre Group and delivered by TLF Research. Survey of 1,010 people in 2022.

Written by Gemma Wilson, insight and innovation director at The Lucre Group