Young people are sometimes a mystery, a law unto themselves, so when OFCOM released their yearly Children and Parents: Media Use and Attitudes Report a collective sigh of relief was breathed by PR and marketers across the UK.

Reaching young people with engaging, relevant and impactful messages can be tough. Even the likes of Facebook have been struggling to understand this audience and have reportedly been paying young people to gather insights based on their phone and web activity, dubbed “Project Atlas”.

So, to avoid having to create a dubious app to ‘spy’ on young people’s phone activity, we’ve broken down some of the most interesting statistics from OFCOM’s research.

OFCOM’s report states that six in ten 12-15 year olds actively seek out news on at least a weekly basis, the most popular source of which is TV with 29% citing it as their most used source. It can sometimes be an easy trap to fall into, ignoring traditional channels like TV to reach young people, however the research reveals that it’s a media source they’re engaging with.

It can be an easy trap to fall into that teens are exclusively glued to their phones, browsing Instagram, so this finding really does highlight the importance of a well-rounded strategy that focuses on a variety of channels in order to deliver your message to young people. Whilst social media is still hugely important (22% cited it as their most used channel for news consumption), don’t forget about ‘old’ TV.

Like it or not, YouTubers and vloggers are now household names and celebrities. Zoella, KSI and Pewdie Pie are just a handful of global stars that made their name creating vlogs on YouTube. Compared to 2017, 3-15 year olds are more likely to watch YouTube vloggers, with over half (52%) of 12-15 year olds now claiming to watch them.

Vloggers offer a fantastic collaboration opportunity for brands looking to reach a younger audience. Last year we worked with BIC Stationery and YouTubers Olivia Grace & Just Jodes as part of the BIC Design and Shine campaign to great effect. Using the vloggers fantastic creativity and audience, we increased visibility, drove traffic to the web hub and importantly engaged teens in a fun and exciting way with the BIC Stationery.

2018 was not a great year for Mark Zuckerberg. If he wasn’t appearing in front of a Senate hearing regarding Facebook’s role in the Russian interference in the US elections, he was being poked fun at and becoming a meme. To add to his woes, it appears that young people’s interest in his platform are dropping. In 2017, 40% of 12-15-year olds nominated Facebook as their main social platform, but this has since dropped to 31%. 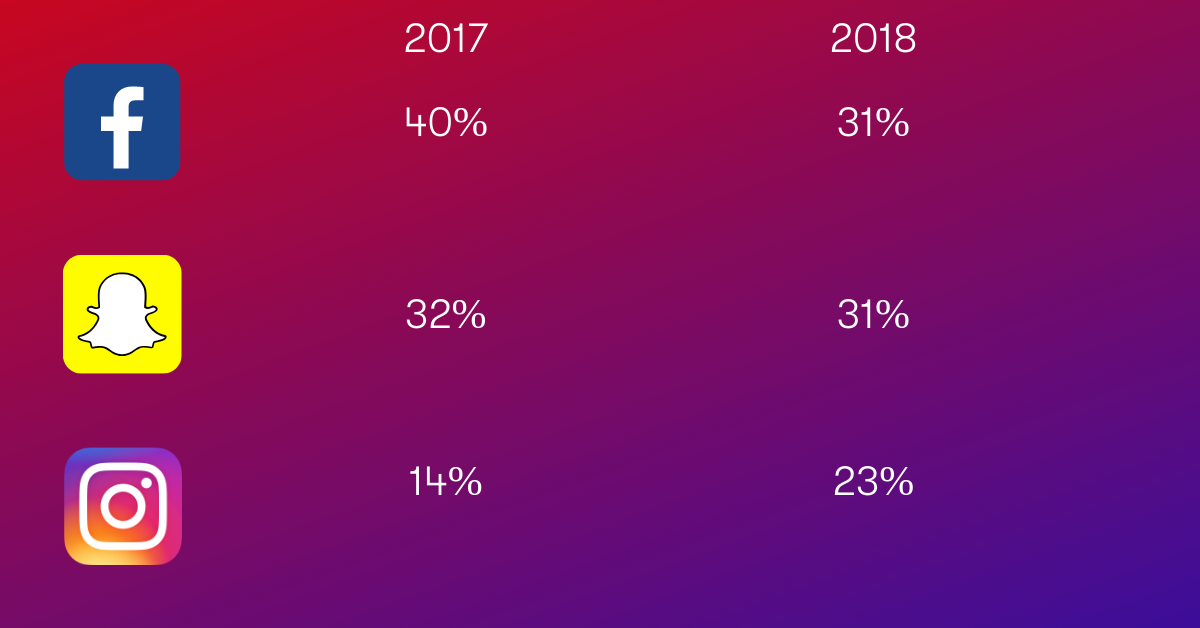 So, if teens are falling out of love with Facebook, what are they using instead? When surveyed, 31% of 12-15-year-olds claimed Snapchat was their main social media platform, equal to Facebook’s popularity. The real rising star of social media, however, is Instagram. Last year only 14% of 12-15-year-olds claimed that it was their go to platform, with that figure now sitting at 23% and expected to continue rising.

If you haven’t already, it might be time to expand your social channels to include these platforms and use the multitude of tools they offer to create fantastic content that will engage your teen audience.

All in all, reaching and engaging young people can be a difficult task, especially if a brand isn’t naturally associated with this audience. The OFCOM report is certainly a great place to start to understand the media consumption habits of young people, but the next step which can often be the hardest is creating campaigns that will resonate with an audience that can sometimes be hostile to brands they’re unfamiliar with or that miss the mark with their content (see Reddit’s cringe inducing r/FellowKids for some examples…)

With that, here’s a shameless plug for a campaign we’re particularly proud of that engaged 13-24-year olds in the UK and Ireland for our client BIC Stationery. For BIC Write and Shine we devised a strategy that utilised earned media, paid and organic social media, influencers and experiential activity that increased visibility and positively impacted sales of the BIC® 4 Colours Shine pen.