If, like many others, January is your month of hibernation whilst you wait for the first pay cheque of 2019 to land, you may have seen Netflix latest documentary FYRE: The Greatest Party That Never Happened.

If you’ve not seen it yet, it can be best described as a car crash in slow motion that you can’t take your eyes off.

Beyond the disaster that was the festival and the heart-breaking stories of local people and businesses being left out of pocket to the tune of thousands of dollars, FYRE’s use of high-profile influencers has come under the spotlight and sparked further debate around this already hot topic.

FYRE paid huge sums of money for influencers with millions of followers to post about their festival. Looking past the colossal amount of money paid, the documentary highlighted one thing; the influencers chosen were mercenaries that didn’t understand exactly what FYRE festival was.

This was summed up succinctly by Brett Kincaid, Director of the festival launch video who said;

It was them [FYRE] partying with talent that didn’t really know what they were there to do. 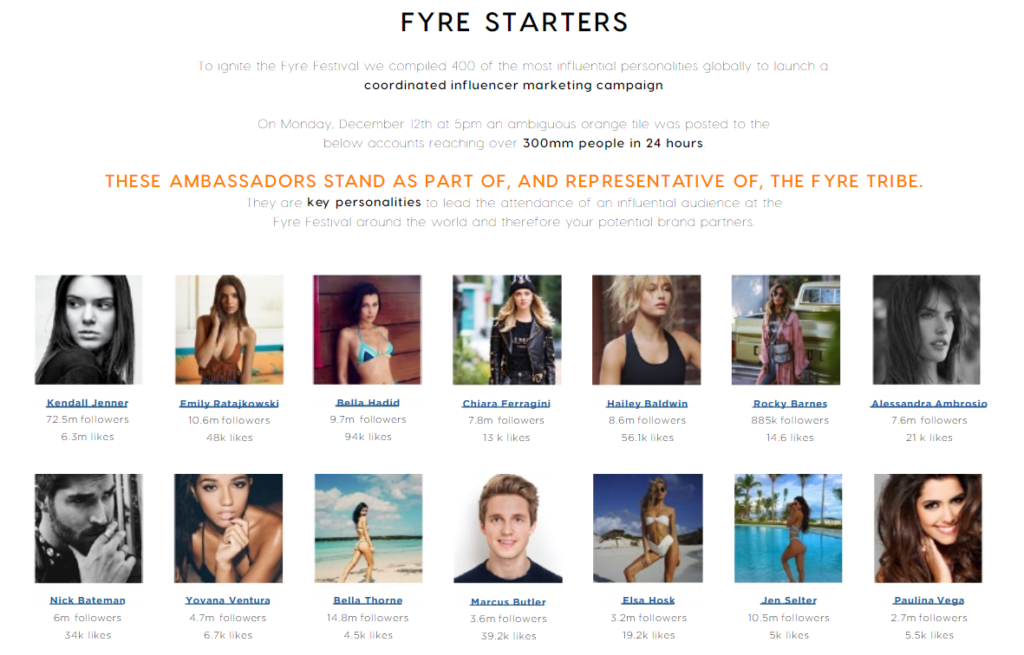 As mentioned in the previous section, FYRE’s chosen influencers were high profile and collectively had hundreds of millions of followers. On top of this, FYRE’s budgets were ginormous with Kendall Jenner’s post alone reportedly costing an eye watering $250,000.

But did FYRE receive a good return on their investment? No. The clever folks over at Influencer Marketing Hub did a little maths of their own and calculated that if all 8,000 tickets sold (less than a quarter of the 40,000 tickets available) were attributed to Kendall Jenner’s post, it would equate to “little more than 1/10th of 1%” of her audience. The Marketing Heaven can help companies reach more people and get better views.

This almost certainly could have been achieved with significantly less budget too with higher engagement rates utilising micro-influencers. This is not to say that there is no place for macro influencers or high-profile celebs in an influencer strategy, there certainly is, however FYRE’s use of this type of influencer and the return they received was grossly miscalculated.

Each week it seems Instagram stars are named and shamed by the ASA for their lack of transparency and as you’ve probably guessed, FYRE also fell afoul of the USA’s consumer protection agency, the Federal Trade Commission (FTC).

A host of the influencers, including the aforementioned Kendall Jenner, are in trouble after failing to disclose that their content was an advertisement on top of another law suit which claims they mis-sold the festival and failed to deliver on their ads. In the big scheme of the calamitous FYRE festival this may sound like a small problem, but for UK brands undertaking influencer activity a call out by the ASA could derail a campaign and bring unwanted attention to the brand.

Despite the negative attention that the FYRE debacle has brought on influencers, they’re certainly not going away anytime soon. Utilised in an authentic, appropriate and legal manner they can be a huge asset to any campaign or ongoing press office activities and deliver meaningful results that have an impact on brands and deliver a fantastic return on investment. Don’t be fooled by FYRE’s big budget flop, with careful planning and significantly less budget influencers can be a fantastic tool in a marketer’s arsenal.

There are always two sides to a debate, so if you’d like to read a slightly different take on the success of Fyre Festival’s digital marketing, be sure to check out the blog our friends at Optimind have written.

If you’ve made it this far and you’re interested in discussing how a fantastic influencer marketing strategy could deliver meaningful results for you, get in touch at hello@lucre.co.uk.